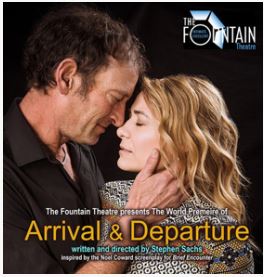 An unforgettable love story inspired by one of the most romantic movies of all time. Stephen Sachs directs Deaf actors Deanne Bray (Sue Thomas: F.B.Eye, Heroes) and Troy Kotsur (title role in Cyrano at the Fountain, Big River on Broadway) in Sachs’ newest play, inspired by the screenplay for Noël Coward’s Brief Encounter. The world premiere of Arrival & Departure will open on July 14 and continue through September 30 at the Fountain Theatre.

In Sachs’ new spin on the classic 1945 British film, a Deaf man (Kotsur) and a hard-of-hearing woman (Bray), two married strangers, meet accidentally in a New York City subway station. As their casual friendship develops into something deeper, each is forced to confront how their simmering relationship could forever change their lives and the lives of those they love.

“A train station is a place of transition, a place people go when they’re on their way to someplace else,” notes Sachs. “‘Arrival & Departure’ is not only a travel term. It expresses the journey of change that the people in this play are experiencing. What happens when you find your soul mate, but the circumstances of life get in the way?”

Kostsur and Bray are married in real life, and Sachs wrote the play with them in mind.

“This is my valentine to the two of them,” he says.

The bed rotates and most of the show unfolds from out of the cabinets! 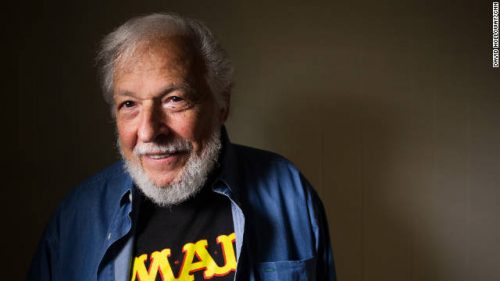 “Truth is, I can’t imagine a world without Nick Meglin. I first met him shortly after I moved to New York in 1976, when I brought my portfolio to MAD. I wasn’t at all ready for the big time yet, but he gave me a lot of encouragement to keep plugging away until I was. For several years after that, I would cross paths with Nick, particularly when he was moderating various MAD panels, and he would always have more words of support and encouragement. This meant a great deal to me, for in those days (and for years to come) Nick Meglin was to a large extent the public face of the MAD staff. He was smooth, charming, glib, funny and always ready with an anecdote. To me, he was MAD. For him to suggest that someday I might be ready to contribute to MAD was akin to Charlie winning the golden ticket to the Chocolate Factory.

That day finally came in 1981, when I got my first assignment for the magazine. Four years later, when Nick and John Ficarra were named co-editors, I became a regular contributor. It was unlike any professional relationship I had in over twenty years of freelancing, mainly because of Nick. He was intensely interested in everything about the people he worked with: ‘What were your parents like?’ ‘Do you have a girlfriend?’ ‘Hey, you like opera, too?’ ‘Your jacket’s kind of shopworn — why don’t you trade it for this snazzy corduroy number I just got from John Boni?’ Working with Nick was like a weekly therapy session in a used-clothing emporium.”
– National Cartoonist Society 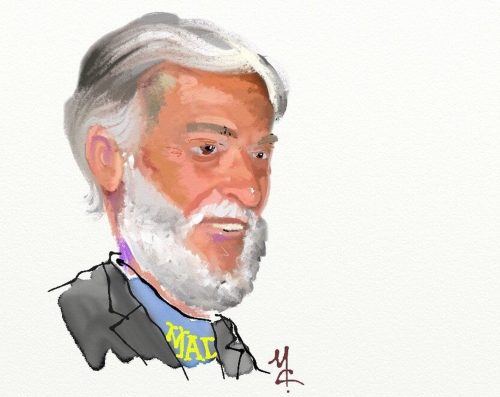 “Nick Meglin was a sharp-witted editor who helped shape the fledging publication once he joined MAD in 1956, the year that Al Feldstein became the magazine’s top editor.

Meglin — who died Saturday of a heart attack at age 82, according to MAD magazine — was for so long the soul of the gifted staff. Bill Gaines, the late founder and publisher of MAD, called Meglin “the heart of the magazine” — a man who was crucial in building and nurturing the magazine’s stable of all-stars.

‘He was a bit zany. . . . He had a great appreciation for the satirical viewpoint — he was gifted with that kind of natural understanding.’

Meglin also helped MAD grow from being ‘a satire of other comic books’ to spoofing politics and pop culture at large. At its circulation peak during President Richard Nixon’s administration, MAD had more than 2 million readers.

‘Nick’s sense of humor was a defining part of MAD magazine,’ says Tom Richmond, a Reuben Award-winning caricature artist at MAD. ‘No other single person had as much to do with creating and perpetuating the MAD ‘voice’ as he did. Both as a humorist and as a person, he was without peer.’

‘Nick was amazing — he was a poet, a good editor, a good writer and artist,’ Aragones says. ‘He could do everything pretty well, and he would crack jokes.’ And what made Meglin especially vital to the magazine, Aragones says, was that the big-hearted editor was ‘a unifier.'”
– As ‘the heart’ of MAD magazine, Nick Meglin influenced much of American comedy, The Washington Post 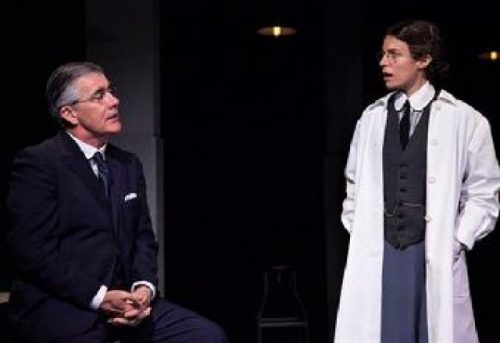 The sobriquet Typhoid Mary has endured as the concept of an individual who willfully or by fate is the source of spreading an epidemic.

In a compelling play by Mark St. Germain, in a theatre that bears his name, the sordid tale of the real Typhoid Mary, Mary Mallon (1869-1938), played with conviction by Tasha Lawrence, unfolds in two acts with a running time of some 90 minutes.

This is a revival of a 1991 play that has been tweaked by the playwright. Staging it again is a commentary on anti-science, fundamentalism and ignorance that pervades our socially and politically divided nation. Like the protagonist, who had no truck with science, medicine and its gibberish, parents refuse to inoculate their children with vaccines. In some cases they have all but eliminated devastating diseases. Such reactionary ignorance evokes key cabinet positions in the current federal government.

In a manner which we have come to expect of historical plays by St. Germain we learn a lot about the disease, its devastation, and efforts to cure and contain it.