Job interviews are horrible. It doesn’t matter how many you have been through, they are always terrifying, And these days, the higher the position, the more difficult the interview process. Of course, the important thing is how much do you want the job? And this is where the ultimate interview comes in, which is the subject of Jordi Galceran’s play – translated by Anne García-Romero and Mark St. Germain – The Grönholm Method at the Menier Chocolate Factory.

Jordi Galceran has written a fascinating story…that brings the recruitment and interview processes used by some firms sharply into focus. I’ve been through psychometric testing, preparing and giving presentations, assessment days, group discussions, telephone, panel, structured, unstructured, competency based, etc in my time and The Grönholm Method (it’s a made up name) is just taking interview techniques to a new level. However, the quality of the writing is not only the method but the twists and turns, of which there are an amazing amount for a 90-minute show, that leave you wondering who exactly is who and is anyone who or what they claim to be?

This is a fascinating play that I found utterly riveting from start to finish.

Mark St. Germain, who previously has had eight of his plays produced by Barrington Stage Company, is back at the Pittsfield theater with “Typhoid Mary,” a revision of what was called “Forgiving Typhoid Mary” for its New York City-area premiere in 1991 and later had the title “A Plague of Angels.” The latest title is the most apt: It better reflects the play’s neutral stance as it explores the life and mystifying behavior of Mary Mallon, an Irish-born cook who, as a carrier of the eponymous bacterial illness, sickened scores of people, some of whom died, in the first 15 years of the 20th century in metropolitan New York.

When the play opens, Mary is confined to a cottage on an East River island near the Bronx that is home to a hospital for those with infectious diseases. It’s 1909, almost a decade after Mary first sickened a family, but it took authorities years to locate and isolate her. Now she’s suing to be released as three people — a middle-aged male hospital administrator, a young female doctor and a young Catholic priest — battle for her future and her soul.

Seen from today’s perspective, Mary’s actions seem appallingly irresponsible and probably criminal; even if she doesn’t understand what was then, 30 years after Louis Pasteur’s pioneering work with vaccines, commonly accepted in the scientific and medical communities, she has to acknowledge the illness and death in her wake. But she refuses, much like some parents of today’s America, who threaten the health and lives of whole communities with their unwillingness to have their children vaccinated…St. Germain’s taut, compelling dialogue and distinctively hewn characters satisfy theatrically and intellectually.

To read the article in full, visit TimesUnion.com ! 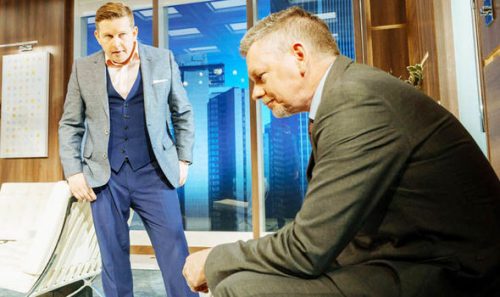 IS it a reality show? Is it a psychological experiment? No, it’s a job interview. In fact, Jordi Galceran’s clever play incorporates all these elements as he puts four candidates through a Kafkaesque selection process for a post in a Fortune 500 company.

Written in 2003, this Catalan play has been translated into 20 languages and performed in more than 60 countries.

The secret of its success is its universality.

Read the full article on Express.co.uk

59E59 Theaters  announces that the final show of the 2018 Subscription Series will be the world premiere of the musical THE HELLO GIRLS, with music and lyrics by Peter Mills, book by Peter Mills and Cara Reichel, directed by Cara Reichel with choreography by Christine O’Grady. Produced by Prospect Theater Company as they celebrate their 20th anniversary, THE HELLO GIRLS begins previews on Tuesday, November 13 for a limited engagement through Saturday, December 22, with an opening night scheduled for Sunday, December 2 at 6 PM. The ticket price is $25 – $70 ($25 – $49 for 59E59 Members). Tickets go on sale to 59E59 Members on Wednesday, May 23 and to the general public onWednesday, May 30. Tickets are available by calling Ticket Central at 212-279-4200 or by visiting www.59e59.org.

From New York to Paris, from ragtime to jazz, an ensemble of triple-threat actor-musicians chronicles the story of America’s first women soldiers. These intrepid heroines served as bilingual telephone operators on the front lines, helping turn the tide of World War I. Celebrate the centennial of these groundbreaking women with an original musical created by Prospect Theater Company’s critically-acclaimed founding artists.

Tammy Ryan, the widely produced Pittsburgh playwright and educator, has been named a New Dramatists resident playwright for the class of 2025.

Each of the more than 60 residents in the program “becomes the artistic director of his or her own seven-year long new play laboratory.” The names were revealed Tuesday at a New York luncheon honoring actor Denzel Washington.

Ms. Ryan will maintain her home in Pittsburgh, where she is an instructor at Point Park University, but travel often to New Dramatists in New York, where writers are empowered to select what to work on, as well as their collaborators. The building includes two theaters, a private writing studio and residence rooms for out-of-town writers. From September through July, New Dramatists hosts new play and musical readings and presentations of works from writer-driven Creativity Fund projects.

“I’m honored of course and encouraged by this gift and promise of support, which comes at a time in my career and life that I can really benefit from it,” Ms. Ryan said from New Dramatists’ August Wilson Room. “I’m beyond grateful and excited for the future and ready to get to work but also thrilled to be part of this amazing community of writers, so many of them whose work I’ve long admired.

“Also the history!” she added. “Staying in the August Wilson Room is a particular thrill. Remembering when I met him as a young writer and he told me to always write from your center of joy! Well I’m feeling that now!”