BroadwayWorld is pleased to announce the winners for the 17th annual Theater Fans’ Choice Awards, by FAR, the largest fan based awards of their kind. Open to anyone to vote, the awards present a full slate of eligible nominees in categories that both mirror the popular critical awards, as well as fan favorite categories for Best Tour, Ensemble and Off Broadway shows.

A record number of fans participated in voting for this year’s awards, doubling the number of votes from last year alone.

BE MORE CHILL leads with a total of 10 wins, followed by HADESTOWN which took home 5 awards. TO KILL A MOCKINGBIRD also takes home 5 awards.

Everyone deals with trauma in different ways — some people throw themselves into their work, some create art, some sing karaoke. In Emma Stanton’s NO CANDY, now having its world premiere at Portland Playhouse, a multi-generational group of Bosnian Muslim women who survived the Srebrenica genocide do all of these things. Directed by Tea Alagic, who is Croatian and was born in Bosnia and Herzegovina, NO CANDY reveals the power and fortitude of the human spirit. At times, it gave me chills. At times, it’s also quite funny.

NO CANDY centers on the lives of four women — Zlata (Mia Zara), Uma (Sharonlee McLean), Olena (Nikki Weaver), and Fazila (Val Landrum) — who run a gift shop near the Srebrenica memorial. The women all lost much (husbands, children, homes…) in the war. Meanwhile, Fazila’s daughter, Asja (Agatha Olson), and her friend Maja (Jessica Hillenbrand), who were just children at the time, don’t understand exactly what happened or why their lives changes so drastically. It’s about holding on, letting go, and supporting one another.

The cast is superb. Val Landrum is excellent as Fazila, the owner of the store who’s struggling to relate to her daughter and has recently started having visions of her dead husband (Ben Newman). She gets the big dramatic moment of the show, a monologue that she delivers exquisitely. Sharonlee McLean is also perfectly cast as Uma, the oldest member of the group and the one who provides both perspective and humor. And those chills I mentioned? All thanks to Croatian-born actress Mia Zara. Zlata is the group’s karaoke singer, and Zara’s magnificent and haunting rendition of a certain 90s grunge song had the whole audience holding their breath.

In addition to Zara’s singing, the most impressive aspect of the production is the set. Peter Ksander uses every corner of the space, including what’s usually the corridor, to create a set with six distinct areas, with a projection on one wall for those who might not be able to see them all clearly. It’s a nice touch, though I was happy to be sitting near the center, where I could see at least most of the action unfold live.

Overall, I recommend NO CANDY very highly. It deals with difficult subject matter and isn’t always easy to watch. But it’s eloquently written, beautifully acted, and an important reminder of the horrors of war and the importance of community.

NO CANDY runs through February 10. More details and tickets here.

Onstage power couple, Kendra Kassebaum and Peter Saide, put on a formidable two-person performance in Village Theatre’s I Do! I Do!The play begins the day they are wed in 1895 and ends fifty years later in 1945. In-between we glimpse personal and often funny moments as well as insight into each partner’s perspective and emotions as characters Agnes and Michael deal with the timeless nuances of marriage. Although the setting is historical, the rhetoric and situations are ultimately just as relevant to present-day relationships. But it is other aspects of this play that make it truly remarkable.

The opening night performance was extraordinary. Members of the audience and I were either laughing or completely silent, fully engrossed in the lives of the characters. I purposefully came to the play knowing nothing of the story in order to have a fresh viewpoint. Near the end of the first act, I realized that Kendra and Peter’s two-person performance felt like that of an entire cast. Other characters were woven into the story in such a way that the mere mention of them brought them to life. I could almost see the priest and wedding-goers in the church and I just knew the baby was playing as her mother tidied up.

At the beginning of the play, two young people stood on the stage saying, “I do!” At the end, two elderly people hobbled away. Wardrobe and makeup changes seemed to happen almost entirely onstage and yet, Agnes and Michael aged. How? The actors, subtly and convincingly, grew old?—?slight changes in posture, gait, speech and costume combined to simulate the passage of time, a tribute to the actors’ talent.

The original Broadway play’s set was wholly in the couple’s bedroom. Village Theatre took a similar, yet at the same time, entirely different, approach. Three separate sets of moving cabinets provide an endless supply of furniture on demand as well as partitions when needed. Just as the set for Matilda was brilliant in its use of sometimes larger-than-life symbolic backdrops, the cabinet set for I Do! I Do! is brilliant in its pure functionality. I would love to meet Master Scenic Artist Julia B. Franz and Scenic Designer David Sumner, who are likely fans of Swedish furniture design and Transformers. The end result of this set style is that at any point during the evening, it can be any room at all simply by closing one cabinet door and opening another. Incredible.

After feeling every emotion possible, I sighed as the play ended and it was time to rehash it all with my husband. It made us both contemplate deep topics like the fleeting nature of life our gratitude for each other.

I Do! I Do! is playing at the Francis J. Gaudette Theatre in Issaquah, Washington now until February 24, 2019, then at the Everett Performing Arts Centerin Everett, Washington March 1–24, 2019. Watch the play for entertainment, insight and to enjoy the talent.

A big “thank you!” to Ann Reynolds for her help. Ann, Village Theatre is lucky to have you!

Read the full article on Medium.

Cincinnati Playhouse in the Park will present THE LAST WIDE OPEN, a love story that encourages audiences to take a personal, humorous look at modern-day courtship, romance and relationships, just in time for Valentine’s Day. It begins Feb. 9 in the Shelterhouse Theatre and runs through March 10, with support from The Rosenthal Family Foundation, Season Sponsor of New Work. Opening night is Feb. 14.

The world premiere, under the direction of Artistic Director Blake Robison, was written by Playwright Audrey Cefaly and described by Cefaly as “a love song in three movements.” This romantic tale sweeps the audience up into three different realities in which the same characters attempt to forge a connection despite language barriers, personal stories and histories, and cultural differences.

The production, which features original songs with lyrics by Cefaly and music by Composer/Sound Designer Matthew M Neilson, follows Lina, a waitress, and Roberto, an Italian immigrant. The two find themselves on completely different paths of their own creation giving the show an element of fantasy.

THE LAST WIDE OPEN takes place in the twilight hours of an ordinary night on a normal day during a thunderstorm. The date is May 5, present day. The location is Frankie’s, a small Italian restaurant that is closed for the evening. Two characters, Lina and Roberto, enter onstage. She is an emotional person and a dreamer. He is a poetic and generous Italian immigrant. They are about to share their fate-filled love story – imagined in three different realities.

“THE LAST WIDE OPEN began as a short, 30-minute play called Clean,” Robison explained. “I loved that play, but it was too short to program into our season as a full evening of theatre. So, when the playwright, Audrey Cefaly, told me that she wanted to expand it into a full-length work, I jumped at the chance to collaborate with her. We commissioned her to write the newly expanded version, and I fell in love all over again.” 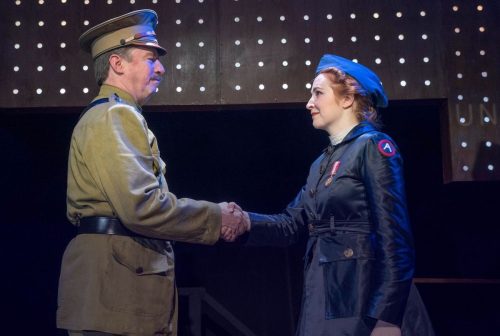 Songwriter Peter Mills—who provides the score for The Hello Girls, just opening with great flair at 59E59 Theatres—has been working quietly for a couple decades now. Considering his enormous talent, he’s been working much more quietly than he deserves.

The Hello Girls isn’t quiet, by any means. It’s a rousing and canny entry at the end of 2018, the #Metoo year. Set in 1918, it’s very much about the Great War, which ended just a few days over a century back. So with a focus on the terrifying war and the active societal equalizing of women, it’s a clever amalgam of something historically pertinent and something contemporarily pertinent.

A 1995 Princeton graduate, who was, of course, a Triangle Club member, Mills co-founded the Prospect Theater Company with Reichel and in the intervening years has written the songs (and often written or co-written the book) for several other highly appealing musicals. These include The Flood, which concerns the 1927 Mississippi River disaster and boasts “It’s Amazing the Things That Float,” arguably the most brilliant song composed for a show anytime recently.

Had Mills been dreaming up songs in the mid-20th century, he would likely have been a celebrated Broadway tunesmith, but the closest he’s come to the main Stem so far is The Honeymooners, a musical adaptation of the classic Jackie Gleason sitcom, for which he wrote only the lyrics (Stephen Weiner, the composer). It opened a year ago at the Paper Mill Playhouse and, for reasons only slightly involving Mills, was sufficiently below par not to warrant much more discussion.

Read the full review on NewYorkStageReview.com!