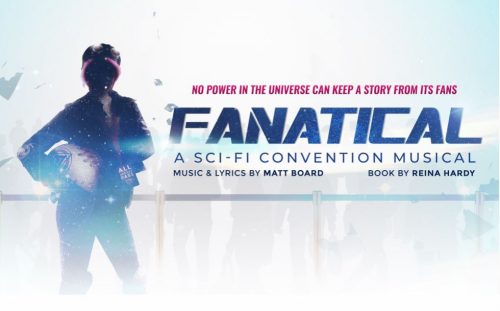 FANATICAL is a brand new musical, ideal for fans of musicals and all things science fiction. It tells the story of how fans of beloved comic book turned TV show Angel 8, can save the day. Set in a UK convention centre; Angel 8 fans eagerly await the arrival of author and keynote speaker Scott Furnish (played by Stephen Frost). Fans, led by Trix (played by Suanne Braun); cannot wait to meet Furnish as the first season TV show of Angel 8 has just finished airing.

With a pop score, it is a fast-paced, upbeat comedy celebrating what it means to be passionate about the things you love. Anyone that is a fan of Stargate, Star Trek, Dr Who, Red Dwarf, Blake’s 7 or Comic Con – it is time to get your geek on -book tickets for the world premiere of FANATICAL on at The Playground Theatre.

This play is recommended for ages 11+

Also! Click here to view the cast announcement on BroadwayWorld.com!

Unexpected Stage Company is presenting “Tell Me Something Good” (Saturday at 4 p.m. Chinese Lounge), a collection of shorts, written and directed by D.C. playwright Audrey Cefaly. The collection includes “Consider the Ficus,” the story of D.C. couple Garrison, an environmental lawyer, and Nate, an editor, whose relationship blows up the very day the Supreme Court legalizes same-sex marriage.

Cefaly is probably best known for her play “The Gulf,” winner of the Lambda Literary Award in the category of LGBT drama. Set on a tiny fishing boat in the Alabama delta, this intriguing two hander explores the tumultuous relationship of lesbian couple Betty and Kendra. The play premiered in 2016 at Signature Theatre with a compelling production directed by out director Joe Calarco and has since been produced in England and Australia.

Though not gay herself, Cefaly’s lesbian working-class characters ring exceptionally true — them, their situations and their plainspoken yet gloriously lyrical dialogue. While writing the play, Cefaly ran some things by lesbian friends. She wanted to make sure she got it right.

Based on a film starring Jack Lemmon, Walther Matthau and Ann-Margret that hit movie theaters 25 years ago, Grumpy Old Men the Musicalis currently playing at the Ogunquit Playhouse in what is touted as the US premiere of the production.

I always get nervous with premiere productions. It usually means that a script is still being tweaked and perfected in hopes of becoming a standard bearer in the theater world archives. The premiere launches the effort, often with a few shortcomings, though there is anticipation that it will reach full potential in the future.

Grumpy Old Men the Musical hits the mark right from the start; there’s no shortcomings here. With a well written fun script, laced with comic one liners, loveable characters, and a lighthearted musical score, Grumpy Old Men exceeded all my expectations.

The action is set in Wabasha, Wisconsin (think Prairie Home Companion) where two aging neighbors, Max (Ed Dixon) and John (Mark Jacoby), have been feuding for more than fifty years over the fact that John once wooed a girlfriend away from Max. That’s what particularly makes Max grumpy as he blurts out greetings to John like, “Good morning, dickhead,” prompting the quick response, “Hello, moron.” They share other insults: “You have a face that makes onions cry.” “The lifeguard was off duty when you jumped into the gene pool.” There’s even a reference to Viagra falls. (Insert your own joke here.)

This show was penned by Dan Remmes, with music by Neil Berg and lyrics by Nick Meglin (who attended a table read of the show before he recently passed at the age of 82.) Director for the Ogunquit production is Matt Lenz.

Everything works extraordinarily well in this premiere production. The story is fun and the characters lively, engaging, and memorable. While the music has no stand out tune, the audience is treated to a great mix of styles.

The number, I Like the Way Things Are, is a thoughtful look at the two old friends who are well set in their ways while the tune, Your Own Home, is a pleasant look at how a house becomes a home by the people who live in it.

While Grumpy Old Men first debuted in a production in Canada in 2011 and never gained traction on the theater scene, I suspect that this new American version might prevail better than its predecessor. It has every element of a solid musical that could easily become a favorite of theaters everywhere from community productions to professional companies. There are great roles for eccentric characters, young lovers, and, of course, two grumpy old men.

Don’t miss this premiere of Grumpy Old Men the Musical. You will be rewarded with a great evening of theater on a stage that overflows with talent.

Something to Say:
New Plays by Women

This sextet of exciting short plays by women from across the country explore, expose, and celebrate today’s world from a powerful female perspective. Good things come in small packages in this remarkable afternoon, proving that less is often much, much more.