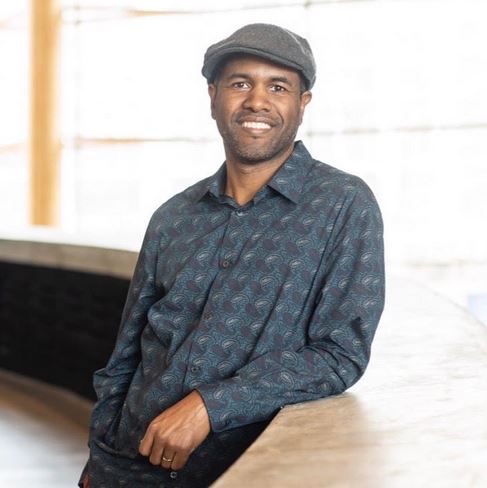 Psalmayene 24 (a.k.a. Gregory Morrison) is an award-winning playwright, director, and actor. Psalm—as his colleagues call him—is currently The Andrew W. Mellon Foundation Playwright in Residence at Mosaic Theater. He is the writer and lyricist of THE BLACKEST BATTLE (Theater Alliance) and the writer, director, and lyricist of the film THE FREEWHEELIN’ INSURGENTS (Arena Stage).

Psalm is currently the host of “Psalm’s Salon at Studio”. Produced by Studio Theatre, “Psalm’s

Salon” is an interview-based series that celebrates and examines culture through a Black lens. He is one of the writers of Arena Stage’s coronavirus pandemic time capsule film, MAY 22, 2020, and he wrote “Double Entendre”, the fifth episode of Roundhouse Theatre’s ten-part pandemic influenced web series HOMEBOUND. His play, LES DEUX NOIRS (2020 Charles MacArthur Award Nomination for Outstanding Original New Play or Musical and Venturous Capital Grant recipient), is inspired by a legendary 1953 confrontation between famed writers Richard Wright and James Baldwin in a Paris café and received its world premiere production at Mosaic Theater Company. THE FREDERICK DOUGLASS PROJECT—his play inspired by Frederick Douglass’ 1845 trip to Ireland and co-written with Irish playwright Deirdre Kinahan—was the first play to be produced on a pier at The Yards Marina in Washington, DC and was the recipient of six 2019 Helen Hayes Award nominations.

Psalm has received commissions from the African Continuum Theater Company, Arena Stage, Imagination Stage, The Kennedy Center, Theater Alliance, Solas Nua, Mosaic Theater Company, and Theatrical Outfit. His one man play, FREE JUJUBE BROWN!, is recognized as a seminal work in Hip-Hop Theatre and is published in the anthology, Plays from the Boom-Box Galaxy: Theater from the Hip-Hop Generation (TCG).

With the premiere of CINDERELLA: THE REMIX at Imagination Stage, Psalm completed his critically acclaimed Hip-Hop Children’s Trilogy that explores the past, present, and future of hip-hop culture. Also having premiered at Imagination Stage, the other two plays of the trilogy are ZOMO THE RABBIT: A HIP-HOP CREATION MYTH and P.NOKIO: A HIP-HOP MUSICAL. Among other awards, the plays of the trilogy have earned two development grants from the National Endowment for the Arts, a Walt Disney Corporation grant, and two Helen Hayes Award nominations for Outstanding Production, Theatre for Young Audiences.

Psalm directed The Welders’ world premiere production of NOT ENUF LIFETIMES by Caleen Sinnette Jennings and the Mead Theatre Lab production of READ: WHITE AND BLUE by The Hueman Prophets. He has also directed theater ensembles in India, Croatia, and Bosnia and Herzegovina as part of Arena Stage’s Voices of Now program.

Psalm is the recipient of the Imagination Award from Imagination Stage (past recipients include Christopher Reeve, Dr. Jane Goodall, and Dennis Haysbert). He has also received grants from the Doris Duke Charitable Foundation, Maryland State Arts Council, DC Commission on the Arts & Humanities, and the Boomerang Fund for Artists Inc.

As an actor, Psalm has appeared on HBO’s critically acclaimed series The Wire, been nominated for a Helen Hayes Award (Outstanding Lead Actor in a Musical), and is a member of Actor’s Equity Association. He had the pleasure of playing Fortune in Arena Stage’s Helen Hayes award-winning production of RUINED.  He is currently featured in Destination DC’s film segment highlighting theatre in Washington, DC.

Psalm is a proud member of the Stage Directors and Choreographers Society.