Cancún  is a richly-layered comedy, a brilliantly-written four hander, by Jordi Galcerán, Europe’s hottest playwright at the moment, from Catalonia, Spain. Two couples from Spain celebrate 25 years of close friendship on the Fourth of July by vacationing in Cancún, Mexico. On a richly detailed set, replete with real, granulated, white sand that puts us there, in the elegant beachside cottage designed by Mariana Fernández, subtle lighting changes designed by Joseph R. Walls make transitions from reality to fantasy. As the couples reel in on stage drunk, their dizzy fest starts with clever mental gymnastics and erupts into frenetic chaos.

As the evening teeters at the brink, Reme (Luz Nicholás) confesses she is a control freak, who hid a set of car keys for 25 years to seal her marriage bond with Vincent (Carlos Castillo).  As a result of Reme’s revelation, each character has a big moment, a confession, when veneers are stripped away. The moral appears to be that a chance event can change life at the toss of a coin. But did Renee’s secret hiding of Vincent’s car keys really shape the course of the lovers’ destinies?  It sounds trivial but, in essence, the stolen keys are the key to the mystery of the friendship. So, what could happen if time could shift into reverse and Reme could go back and change that event? That’s all the plot you need. 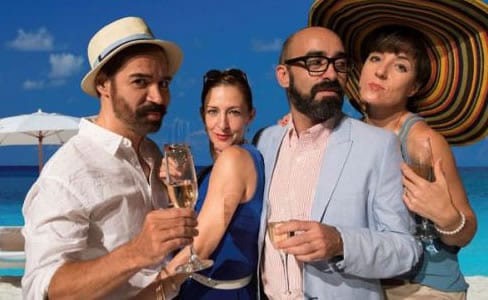 Director José Zayas, who directed GALA’s  acclaimed House of the Spirits/La casa de los espíritus in 2013, whips up the energy-level to an animated, farcical pitch that never lets down. The pacing is like a brisk hurricane. The flash-by sur-titles almost don’t keep up. Kudos for the magnificent ensemble work by Luz Nicolás as Reme, Chani Martin as Pablo, Carlos Castillo as Vicente and Maggie Bofill as Laura. Multifaceted Nicholás goes over-the-top and sets the tone. Using her expressive face, Nicholás  plays Reme as a woozy, soul-eyed clown, tipsy-to-the-brim with champagne.

But here’s the catch. In another scene, Reme falls asleep on a beach lounge chair and there is a blackout. When the stage floods with rosy-warm morning light, Reme awakens and Laura’s husband, Pablo (Chani Martín) enters naked from the bedroom. So what’s going on here? Pablo is the husband of Laura (Maggie Bofill). We’re in Reme’s mind, in her fantasy world.

So what’s this play about? Jealousy and competition, stealing boyfriends, swapping husbands, couples cheating on each other? Nothing that dull. This is razor sharp satire about how chance plays a part in our lives. A  popular proverb in Spanish keeps surfacing throughout the  rat-a-tat dialogue and works like a unifying refrain:  “Que vino por el canto de un duro.” Translated here in the GALA sur-titles, means that what happened in the past happened “at the flip of a coin.” It’s a catchy saying, similar to meaning we get through life “by the skin of our teeth.” The point here is that we in the audience, like the characters, are never exactly certain what happened. There’s a thin line between fantasy and reality.

Each character has a moment of revelation: First, is Reme an evil manipulating temptress?  Eve in the Garden of Eden? A control freak?  The trick she played that backfires, changed lives.  But Nicolás plays an unlikable trickster with such depth of feeling, her meltdown scene over the loss of memory wins our empathy. During Vincent’s angry reaction to Reme’s revelation about hiding car keys, he denies they had children and destroys her most precious, deeply personal memories. Reme, stripped of all veneer,  falls to her knees crying: “I’d never imagined that you could become so cruel……..You’re playing with things that are my life.” It’s this heart-rending soliloquy about loss of identify made palpable was so powerful that you could feel in the pin-drop silence on opening night.

Carlos Castillo plays Vincent as an innocent, flummoxed, confused male torn between two realities. His big, revelatory moment is a soliloquy filled with resentment about twenty-five cooped-up years with a wife and kids. His outcry ends with a piercing barb against invasion of privacy and a pain-filled cry for freedom. “You took away the keys to the only car that could have taken me somewhere.”

New York newcomer to GALA Maggie Bofill brings a towering, sunny stage presence to the character of Laura. Her solo moment, a confession of the replay of  going to a swingers club and hooking up with strangers, is hilarious.

Chani Martin as Pablo, who is a professor of theoretical physics, in his soliloquy about Einstein’s theory of relativity opens up the play’s meaning.  In a climactic, revelatory soliloquy, rendered in a matter-of-fact tone by Martin as Pablo, against an overlay of mathematical formulas projected in the lighting design,  Pablo tells us about how if you travel near the speed of light, you time travel backwards to your past. Or if we  accept the incompleteness theorems by the mathematician Godel, who put forth the exciting possibility of more than one world, Reme can travel back in time and change events. Time and velocity can only be realized on paper today; but illusions are as real as facts, Pablo claims. Godel remodeled the universe and defined time lines that “…..could begin to curve until they form a circle, thus uniting with their own past.” Reme can travel back, change her life and the other characters’ lives.

But can she really?  It’s an intriguing puzzle. In the play we ricochet between fantasy and reality and we’re never exactly sure of what happened. Whew! You have to hang on to your straw hat to protect yourself from the heat of the surprise twist at the end, the mark of Galcerán’s style: Cancún’s kicker is startling and ironically humorous. It keeps you edgy in your seats, it’s heady stuff, a sophisticated, a daring, magical journey into the mind of a woman’s fantasies.  And it’s worth seeing to get in on the standing ovation and cheering that started on opening night.