Of love, nourishment and compassion: Beauty and insight inhabit this sometimes sorrowful microcosm by Gordon Spencer 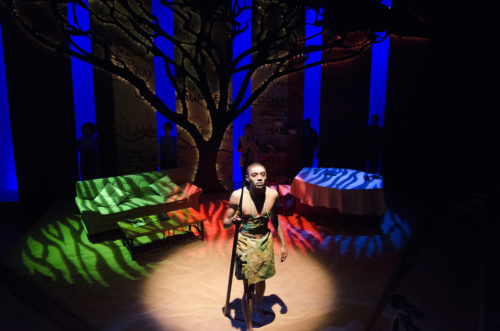 Compassion dwells in the heart of Tammy Ryan’s 2010 play Lost Boy Found in Whole Foods .  Significant multiple meanings of the title abound as well. As the performance at Omaha Community Playhouse progresses, the intelligent depth within becomes more and more impressive, until even sorrowful, disturbing elements reveal touching beauty.

A Sudanese refugee, no longer called by his ancestral tribal name, has acquired an alternate identity:  “Gabriel.” Torn from his roots, he is one of the surviving escapees from the horrors of civil war, collectively, historically known as “Lost Boys of Sudan.”   Out of his childhood and out of Africa, he has found his way across continents to live in our land of plenty, no longer existing by eating weeds, insects and tiny grains of wheat. Despite being saved, he can never be entirely complete until he finds himself reunited with his family in his own land.

Ryan explores this type of story, certainly not a unique one in real life. With her special points of view, she does not create a history lesson nor some kind of moral fable. She portrays real human beings, with their complexities, their flaws, their bright dimensions and their darker ones.

At the glowing center stands Millard North High School junior Justice Jamal Jones impressively and majestically inhabiting the role of Gabriel—a perfect match for what the writer has written.

Among the hills and valleys of Pittsburgh, Gabriel finds nourishment and stability working with vegetables and fruits of the market. There he intersects with affluent single mom Christine who reaches out to him, offering the comfort of her home. She and he interact with her sometimes emotionally displaced teenage daughter, Alex. The domestic relationships do not run smoothly, complicated by visits by seemingly dangerous Panther, who fled Sudan with Gabriel.

Kind Christine does all she can trying to re-connect Gabriel with his mother back in his homeland, aided by social worker Segel Mohammed, a Moslem.

In these scenes and others Ryan perceptively explores the realities of Gabriel’s and Christine’s behavior and motivation, as they ask questions of themselves and each other, the essence being that no such situation can be simple. In time, we also learn that, despite Gabriel’s easy smile and seeming sunshine, he remains haunted—as does Panther, whose inner life, gradually revealed, also calls for empathy and understanding. Here again Ryan evokes sympathetic understanding, looking beneath the surface.

She not only brings much food for thought to the table, including traces of American racism, she  also impressively incorporates background about native tribal practices and pride of family, perhaps as alien to us as would be, to many Africans, the strains within the white mother and daughter’s home.

Director Lara Marsh has staged this with unerring insight, keeping the performances genuine, blending them into something natural and truthful. There Rusheaá Smith-Turner shines full of personality as Sergel Muhammed. At all times, too, Julie Fitzgerald Ryan’s version of Christine remains especially convincing.

Omaha percussionist Vince Krysl has provided excellent music to underscore the drama, a fine choice, given the African background of the story, and Steven Williams’ set of fragmented pieces of a map, symbolically, pointedly echoes the fragmented lives traversing those spaces.

Without this script ever saying so directly, there are overtones and undertones of what it must be like in our present day for refugees from Syria’s horrors trying to eke out existence, camping in mud along the borders of Europe.

Even as they move—and this play moves on to its complex conclusion—so might we all be moved.