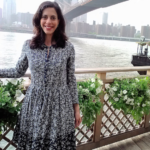 Yasmine Rana received a 2015 Fellowship from the New Jersey State Council on the Arts and was one of six finalists for the 2015 Francesca Primus Prize (THE WAR ZONE IS MY BED).  Her plays have been developed and performed in the United States and internationally at theaters including Playwrights Theatre of New Jersey, La MaMa Theatre, Halcyon Theatre of Chicago, New Stages Performing Arts Center in the Berkshires, Write-Act Repertory Theatre in Los Angeles, The Looking Glass Theatre, Johns Hopkins University Theatre, Tara Arts Theatre of London, Nora’s Playhouse, and T. Schreiber Studio and Theatre among others. She was a founding member of Nora’s Playhouse.

Other honors include a Paulette Goddard Fellowship from New York University and a Walter E. Dakin Fellowship in Playwriting from the Sewanee Writers Conference. She was a finalist for La MaMa Theatre’s inaugural Ellen Stewart Award. She is a recipient of the Paramus Education Foundation’s Lifetime Achievement Award. Rana was selected by the Tommy Hilfiger Company and Glamour Magazine as one of four outstanding women of New Jersey to benefit the Women of the Year Malala Fund.

Noteworthy plays include THE WAR ZONE IS MY BED, THE FALLEN, BLOOD SKY, RETURNING, PARADISE, ANOTHER SPRING, JASMINE SPRING, FAUNA AND TEARS, and COFFEE AT THE HAGUE, among others.  Her plays and monologues have been published in The Alabama Literary Review, The Best Contemporary Monologues of 2014 (Applause Theatre and Cinema Books), The Best Men’s and Women’s Monologues of 2013 (Smith and Kraus Publishers), Blackbird, The Kenyon Review, TDR: The Drama Review, and The Contemporary European Idea. Translations include the Romanian-language anthology, Cinci Piese de Teatru. The University of Chicago Press and Seagull Books’ In Performance series published The War Zone is My Bed and Other Plays, an anthology of four of Rana’s plays. The anthology was reviewed in The Slavic and East European Journal.

She received her BFA and MFA in Dramatic Writing from New York University’s Tisch School of the Arts and is a member of the Dramatists Guild of America.