Thomas Gibbons is playwright-in-residence at InterAct Theatre Company in Philadelphia, which has premiered eight of his plays: PRETENDING TO AMERICA, 6221, AXIS SALLY, BLACK RUSSIAN, BEE-LUTHER-HATCHEE, PERMANENT COLLECTION, A HOUSE WITH NO WALLS, and SILVERHILL.  Other plays include THE EXHIBITION and HOMER.

He is the recipient of seven playwriting fellowships from the Pennsylvania Council on the Arts, the Roger L. Stevens Award from The Fund for New American Plays, the Barrie and Bernice Stavis Playwriting Award, the NAACP Theatre Award, two Barrymore Awards for Outstanding New Play, and a Pew Fellowship in the Arts.

PERMANENT COLLECTION was the pilot selection of the National New Play Network’s Continued Life of New Plays Fund, and A HOUSE WITH NO WALLS was a subsequent selection. Both plays, along with BEE-LUTHER-HATCHEE, are published by Playscripts. 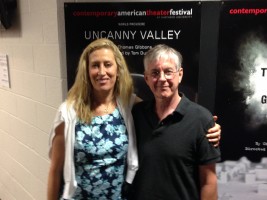 Susan Gurman and Tom Gibbons at
CATF 2014 for the world premiere of
Tom’s UNCANNY VALLEY.