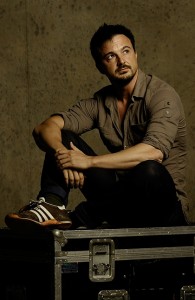 Guillem Clua is a playwright from Barcelona, Spain. He is considered one of the most innovative voices in the Spanish theater scene and part of a new generation of playwrights born in the seventies who are transforming the Catalan stage with their plays. Critics have described his work as multidisciplinary, eclectic, and very much concerned with narrative structure and plot. Storytelling is at the heart of his style, which combines elements of comedy, thriller and melodrama, a vibrant rhythm, and the unabashed influence of other media, such as television and cinema.

Guillem Clua holds a degree in Journalism from the Autonomous University of Barcelona (Spain) and started his theatre training at the London Guildhall University (UK) in 1994. In 2000 he completed his theatre studies in the prestigious Obrador de la Sala Beckett, where he was taught by Jordi Galceran, Enric Nolla, David Plana, Sergi Pompermayer, Martin Crimp and Juan Mayorga, among others.

His first play, INVISIBLES, won the 2002 Theatre Prize Ciutat d’Alcoi, one of the most important awards for new plays in Spain. He also wrote the stage adaptation of Thomas Mann’s DEATH IN VENICE (Sala Muntaner, 2002). In 2004, his play LA PELL EN FLAMES (SKIN IN FLAMES) (Villarroel Teatre, 2005) won the Ciutat d’Alcoi for the second time and the 2005 Critics Choice Award for Best Play of the Year. Its English translation premiered in several American cities as well. Clua is also the author of numerous and celebrated short plays, such as GOLIATH, ANDROMEDA OR DORIS DAY, ENEMY OF THE PEOPLE, presented at the Sala Beckett. In 2006, the playwright moved to New York, where he presented the English version of GUST DE CENDRA (TASTE OF ASHES) at the Spanish Repertory Theatre. His last play MARBURG, the most ambitious so far, premiered at the National Theatre of Catalonia in May 2010, making Clua the youngest playwright that’s ever had the chance to premiere in that venue. His first musical, KILLER, premiered in Barcelona in January 2011 (Sala Muntaner) and transferred to a bigger venue after its run (Villarroel Teatre) due to the great success. Clua is currently working on his last full-length play, LA TERRA PROMESA (PROMISED LAND), a farce about climate change that will be produced in Barcelona in 2012.

In recent years he has worked as scriptwriter for the television series EL COR DE LA CIUTAT(TV3), of which he became the head writer for the 2005/06 and 2007/08 seasons. Clua is currently working for other Spanish TV shows like 90-60-90 and LA RIERA, and is writing the big screen adaptation of his play MARBURG.

DJ Sanders has translated Guillem Clua’s SKIN IN FLAMES (from the original Catalan LA PELL EN FLAMES) and TASTE OF ASHES (from the original Spanish EL SABOR DE LAS CENIZAS), in addition to Àngel Guimerà’s 1896 classic THE LOWLANDS (from the original Catalan TERRA BAIXA). Sanders is also the author of more than twenty original stage plays, including TEMPTATIONS OF THE FATHER, CYPHER: variations on therapy, sex, and baseball, and six ten-minute plays published with Brooklyn Publishers. His works have been presented in Australia, India, and coast to coast in the United States. Sanders previously taught advanced English for non-native speakers at the University of Illinois, the University of Barcelona, and Washington University in St. Louis. He is currently pursuing further graduate studies at Washington University in St. Louis focusing on the translation of drama. He is a member of the Dramatists Guild.

More information on Sanders’ plays and translations is available at http://www.djsanders.com.