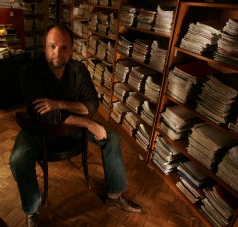 Curt Columbus became Trinity Repertory Company’s fifth artistic director in January 2006. His directing credits for Trinity include BEOWULF: A THOUSAND YEARS OF BAGGAGE, MIDDLETOWN, VANYA & SONIA & MASHA & SPIKE, THE MERCHANT OF VENICE, HIS GIRL FRIDAY, CAMELOT, CABARET, THE ODD COUPLE, THE RECEPTIONIST, MEMORY HOUSE, BLITHE SPIRIT, CHERRY ORCHARD and the world premieres of Stephen Thorne’s THE COMPLETELY FICTIONAL, UTTERLY TRUE, FINAL STRANGE TALE OF EDGAR ALLEN POE and Jackie Sibblies Drury’s SOCIAL CREATURES. Trinity has been home to the world premieres of three of his plays, PARIS BY NIGHT, THE DREAMS OF ANTIGONE, and SPARROW GRASS, and to two of his translations, Anton Chekhov’s IVANOV and Georges Feydeau’s A FLEA IN HER EAR. Prior to his arrival at Trinity, Curt lived and worked in the Chicago theater scene for almost twenty years. He was artistic associate of Victory Gardens Theater from 1989-1994, the director of the University of Chicago’s University Theater from 1994-2000, and the associate artistic director of Chicago’s Steppenwolf Theater Company from 2000-2005, where he premiered his translations of Chekhov’s UNCLE VANYA and CHERRY ORCHARD, and Elsa Bernstein’s MARIA ARNDT.

Curt’s adaptation of Dostoevsky’s CRIME AND PUNISHMENT (with Marilyn Campbell) has won awards and accolades at theaters around the United States, the United Kingdom and Australia. His translations of Chekhov’s THREE SISTERS and IVANOV are now published by Dramatists Play Service, as is his play, SPARROW GRASS.

For more information on Curt, through the Trinity Repertory Company, visit here.