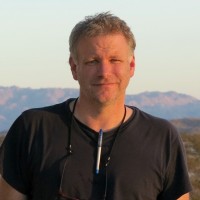 Charles Evered took his undergraduate degree from Rutgers-Newark and an MFA from Yale University, where he studied with director George Roy Hill. Mr. Evered has won several awards for his writing including The Crawford Award, The Berrilla Kerr Award, The Alfred P. Sloan Fellowship at The Manhattan Theatre Club, The Chesterfield/Amblin Fellowship, The Edward Albee/William Flanagan Fellowship, The Bert Linder Fellowship and The Lucas Artist Fellowship at the Millay Colony.

His plays have been published by Broadway Play Publishing, Samuel French and Smith and Kraus among others. Additional plays include: Traces, Wilderness of Mirrors, Bridewell, Ted’s Head, Clouds Hill, Looking Again, (“Best Ten Minute Plays 2012”, Smith and Kraus) and Ten. He has written screenplays and teleplays for studios such as Universal Pictures, NBC, Dreamworks and Paramount Pictures.

His produced film and television credits include an episode of Monk entitled “Mr. Monk and the Leper” for USA Network, starring Tony Shalhoub. Mr. Evered wrote and directed the feature film Adopt a Sailor, starring Peter Coyote and Bebe Neuwirth. Adopt a Sailor was an official selection at more than twenty national and international film festivals, premiering on Showtime. In addition, he wrote and directed the short film Visiting, which premiered at the Palm Springs International Film Festival. His second feature film as a director, A Thousand Cuts, starred Michael O’Keefe and was nominated for a Saturn Award by the Academy of Science Fiction, Fantasy and Horror Films. It was distributed by Kino Lorber. Mr. Evered’s most recent film, Out, starred Gloria LeRoy and had its world premiere at the Newport Beach Film Festival.

His play, Knock, Knock, premiered in London at Theatre503 in 2014. His newest play, An Actor’s Carol, which he directed, premiered in December 2015 starring Tony winner Hal Linden and was nominated for eight Desert League Awards, winning the Bill Groves Award for “Outstanding Original Writing.”

Mr. Evered is Founder and President of the “Charles J. Evered House,” a non profit artist residency for military veterans and those who serve in conflict zones located in the Hi Desert of Southern California, near Joshua Tree National Park. The house is named for his father, a veteran of World War II. Evered himself served in the United States Navy Reserve, reaching the rank of Lieutenant.

He is currently Professor of Playwriting at the University of California – Riverside, where he served as the founding artistic director of the Department of Theatre, Film and Digital Production. His work has been profiled in the New York Times, BBC World and on NPR, among other outlets.

In 2010 he formed a production company called Ordinance 14.