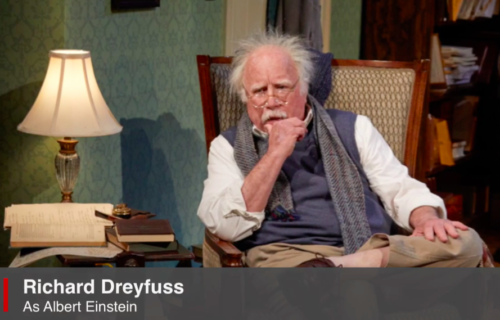 Lest you feel intimidated by seeing a play about Albert Einstein, a name synonymous with genius, know that title of Mark St. Germain‘s new bio drama “Relativity” is a cheap pun.

The play, having its premiere at TheaterWorks through Nov. 23 (yes, the run has been extended again), is about Albert Einstein, and of course his theory of relativity is discussed. But it’s also about his relatives, particularly a daughter he abandoned at birth.

Those are two heavy topics for a short, three-person play. St. Germain, the prolific playwright whose “Dancing Lessons” and “Freud’s Last Session” have been staged at TheaterWorks in the past, has specialized in smart yet accessible plays about world history, philosophy and social conscience. He’s like the Public Broadcasting Service of the regional theater realm.

St. Germain works the concept of relativity into the fabric of this new work. He balances darkness with lightness. He delves into Einstein’s private life while riffing on the absurd scale of his worldwide fame. He balances comedy and tragedy.

Having an internationally known film star, Richard Dreyfuss, play this iconic brainiac makes St. Germain’s job considerably easier. Dreyfuss has the rare ability to underplay and overwhelm at the same time. He has a laid-back majesty supremely suited to this tricky role.

Dreyfuss shares St. Germain’s concern about lightening the drama whenever possible. He makes a funny popping sound with his mouth. He can play out the word “Well…” into multiple syllables. He delights in a toy on his desk.

Read the full article from the Hartford Courant here.