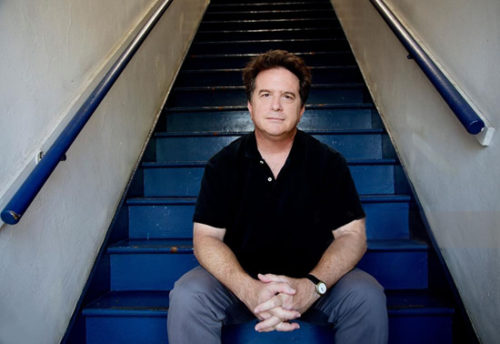 A conversation with The Fountain Theatre’s Stephen Sachs

Since starting The Fountain Theatre in 1990, Debra Lawlor and Stephen Sachs have put on new plays that challenge perceptions. Los Angeles’ Fountain is also a founding member of the National New Play Network (NNPN), a network of theatres around the country committed to the development of new plays. As part of NNPN’s rolling world-premieres program, they are the first of five theatres to produce, Building the Wall, written by Pulitzer Prize and Tony Award-winning playwright Robert Schenkkan.

The play is set in 2019, when President Trump has built the southern border  wall and the rounding-up and detention of millions of immigrants is in full swing. The play follows a  writer interviewing the supervisor of a private prison as the supervisor awaits sentencing for carrying out the federal policy that has escalated to extreme levels. During the Fountain’s rehearsals the co-artistic director, Stephen Sachs, took time to sit down with me to talk about the need to take action as theatre artists at this time.

Stage Directions: Tell me about the Fountain Theatre?

Stephen Sachs: We create work that reflects the cultural diversity of the country, and social and political issues affecting our community.

Tell us how Building the Wall came to be at the Fountain.

I’ve known [playwright] Robert Schenkkan for 30 years. We were both members of Ensemble Theatre Studio when he was a fellow actor. During the 2016 election season, we were determined for the Fountain Theatre to make a political statement, to do something to inspire social action. Then Robert sent me a draft of Building the Wall. He had written it in just one week—he did it in a blaze of white heat! It was very raw and I was just blown away by it. It was terrifying, and we knew immediately that we had to do it.

Theatre audiences in general tend to skew left, and you’re here in Hollywood… aren’t you “preaching to the choir” with a piece like this?

There is that challenge of potentially preaching to the choir, but I must trust the diversity of our audience. We can’t remain silent. As an artist, I think some of the greatest theatre has come out of social and political upheaval, of unjust and dangerous times. Theatre must be the moral conscience of this country, and to me, there is no higher calling than for theatres like ours to do works like this.

What are you hoping to do with this production?

I am hoping to move the audience with this experience. They will be seeing a play that is a warning of the horrors that could come under this new administration. My hope is that it triggers them into action. It’s not enough to just say how upsetting and depressing the times are—we need to be inspired into action that is positive. There needs to be a movement forward.

And for those who happen to be Trump supporters?

What Robert has done is written about a Trump supporter who has followed the party line, and implemented the program. It’s about a person who has rounded up and detained immigrants, who has been part of a program that spirals out of control. This is that man who says he was just following orders. Sometimes the most horrific acts are committed by the simplest, most normal people. This play holds a mirror up to ourselves, and shows us what direction we could be moving with all this. To emphasize this, we’re moving the seating so that the production is three-quarters in the round. Audience members will be looking across the stage at each other during the production. I think that’s powerful.

Why is it important to produce this play now?

We want to give the theatre community the opportunity to give creative voice to what is happening now–what Trump means, what he’s already doing. So many people in theatres everywhere are wringing their hands, asking, “What can we do?” We can sign petitions and march as citizens as we should, but what can we do as a theatre community? This play offers the theatre artist and their audience something…

A call to arms so to speak –

So this play fits the mission of the Fountain.

Very much. Theatre can change people, and I want people to leave the Fountain and somehow see the world differently. I want them to be able to look into the soul of a human being and see a greater sense of truth. Theatre for us is a higher calling, and if what we’ve done enabled audience members to see a greater sense of truth, then we’ve done our job.