Based on L. Frank Baum’s nostalgic classic, The Wonderful Wizard of Oz, The Wiz is considered a cultural phenomenon sparkling with heart-pounding soul, unforgettable gospel and infectious rock rhythms. Grammy Award-winner for Best Cast Show Album, and ranked as one of the highest watched live television musicals, this reimagined familiar favorite will have you ready to “Ease on Down the Road” to meet The Wiz for yourself!

Paper Mill Playhouse, by arrangement with Jeffrey Finn, presents the world-premiere production of the new musical comedy The Honeymooners, based on the CBS television series of the same name, beginning September 28.  Music by Stephen Weiner and Lyrics by Peter Mills. 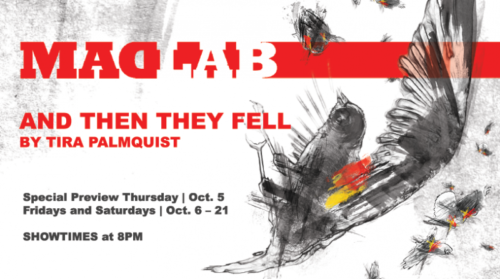 MadLab’s Ohio premiere production of And Then They Fell by Tira Palmquist will take place Fridays and Saturdays, Oct. 6 – 21, 2017, with a special preview performance on Thursday, Oct.5, at MadLab, 227 N. 3rd St., in Columbus. Admission is $18 for the general public, $15 for students and seniors and $13 for MadLab members. Tickets are available online at www.madlab.net.

JorDan Matthews would be fine, if her mother could hold down a decent job, or if her mother hadn’t been arrested on another DUI, or if her mother’s boyfriend wasn’t a skeevy bastard. But things aren’t fine, and Jordan’s life is falling apart. The adults in her life are either impotent or uninterested, and the only solace comes from out of the blue.

Tira Palmquist’s plays include Overburden, Two Degrees (Denver Center), Ten Mile Lake (Serenbe Playhouse), Age of Bees (MadLab Theater, Tesseract), And Then They Fell (Brimmer Street, New York Film Academy). Two Degrees had its World Premiere in the Denver Center’s 2016/17 Season and was also listed in the 2016 Kilroys Honorable Mention List. Ten Mile Lake, which premiered in 2014 at Serenbe Playhouse just outside of Atlanta, GA, was a finalist for the 2015 Primus Prize. Her work as a director and dramaturg includes several seasons at the Seven Devils Playwrights Conference and the New Territories Playwriting Residency, a program she developed with Brian Clowdus at Serenbe Playhouse in Georgia. More info at www.tirapalmquist.com.

“We consider Trinity Rep to be one of Rhode Island’s real jewels and Curt Columbus to be its outstanding artistic director,” said Solomon and. Lapides. “Therefore, both of us feel honored to be associated with such a world class theater and artistic leader.”

“It is a great honor for me, both personally and professionally, to be associated with both Art and Sally,” said Curt Columbus. “Sally Lapides and her family have been supporters of Trinity Repertory Company since its founding, and she is one of the premier corporate and philanthropic leaders of Rhode Island. Art Solomon is a world class businessman who has made his home in Providence. In getting to know him, I have been struck by his intellect, his heart, and his capacity for understanding art. They are people of taste, experience, and class. I know that their naming of the artistic director chair at Trinity brings their imprimatur with it, and I am beyond thrilled.”

Rhode Island’s Tony Award-winning theater, Trinity Rep has created unparalleled professional theater for and with its community since its founding in 1963. Trinity Rep strives to facilitate human connection and has been a driving force behind the creativity that fuels and defines the region for more than 50 years.

Trinity Rep is committed to reinventing the public square and inspiring dialogue by creating emotionally-stimulating live productions that range from classical to contemporary and innovative education programs for all ages and abilities. Its annual production of A Christmas Carol has brought families together for 40 years and made memories for over a million audience members.

Subscriptions for the 2017-18 season are now on sale. The season includes Death of a Salesman by Arthur Miller, Skeleton Crew by Dominique Morisseau, Into the Breeches! by George Brant, Othello by William Shakespeare, Native Gardens by Karen Zacarías, and Ragtime by Terrence McNally, music by Stephen Flaherty, lyrics by Lynn Ahrens, based on the novel by E.L. Doctorow. For more information and to purchase tickets, call the box office at (401) 351-4242 or visit Trinity Rep’s website at www.TrinityRep.com.

LEAF CUTTER, written by Yasmine Rana (center, above), was a finalist for the City Theatre National Award for Short Playwriting. It was awarded a staged reading at the Olympia Theater in Miami at the CityWrights 2017 launch, and directed by Artistic Director Margaret Ledford (above, left).