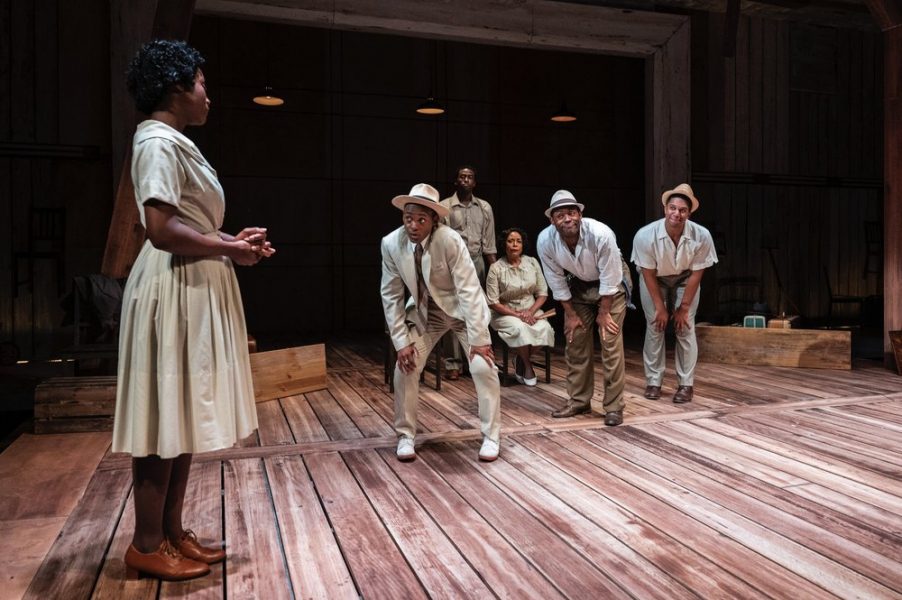 The cast of The Till Trilogy: ‘The Ballad of Emmett Till.’ Photo courtesy of Mosaic Theater Company.

The story of Emmett Till is not an easy story to tell. It is a story that is kept out of history books because it is the brutalization of a Black, teenage boy from Chicago who did not return home alive from a trip to Mississippi. Emmett Till, whose nickname was “Bobo,” was visiting his family in the summer of 1955 when he whistled at a white woman working at a store. This simple action led to his kidnapping and torturous murder. The death of Emmett Till was one of the factors that led to the historic civil rights movement across the South.

The collaboration between Bayeza, Wilks, and the phenomenal actors acknowledges the voices of history that should never be forgotten.

Knowing the story and seeing it come to life on stage is like reading a book and already knowing the ending. It is not about the end, but the journey of who Emmett Till was before his wrongful murder at fourteen years old. His life before his death needs to be told and remembered. The play is the first part of a trilogy presented by the Mosaic Theater Company and recalls the last two weeks of his life. Written by Ifa Bayeza, it is directed by Talvin Wilks. The collaboration between Bayeza, Wilks, and the phenomenal actors acknowledges the voices of history that should never be forgotten.

The play’s first scene begins with a beautiful harmonization about the spirit of Emmett Till and the power of his name. The ensemble cast of five, along with Antonio Michael Woodard who plays Emmett Till, envelope the stage with church-like essence by praising the life the young boy had before his murder. The ensemble actors, Billie Krishawn, Rolonda Watts, Jaysen Wright, Jason Bowen, and Vaughn Ryan Midder remind the audience that Till was an innocent child, loving the life that he had.

As Emmett Till, Antonio Michael Woodard delivers a powerful performance by embracing the youthfulness of a young child. His embodiment of Till depicts true, Black boy joy in 1955. His character is seen dancing on stage with Billie Krishawn (Mamie Till-Bradley), joking around with his best friend Wheeler (Jaysen Wright), mocking his family members, having crushes on girls, speaking his mind, stuttering, and other childlike antics. The story goes into detail about the culture shock he faced traveling from Chicago to Mississippi and how children in the south grew up differently than children in other parts of the country. All the actors should be commended for balancing a heart-wrenching story with moments of joy. To tell this story takes a strength that goes beyond words.

The audience must remember that this story is not fictional. Emmett Till’s death still haunts communities around America and has impacted families for generations. These stories of pain should not be glorified but a call to action against racism in this country.

Running Time: 90 minutes with no intermission.

“The Ballad of Emmett Till” and the rest of the trilogy runs through November 20, 2022 at The Mosaic Theater Company at Atlas Performing Arts Center, 1333 H Street NE, Washington, DC 20002. For more information and purchase tickets, click here. Masks are still required in performance spaces and theaters, but masking in public areas such as lobbies is optional.

Article by Camron Wright for the Maryland Theatre Guide.