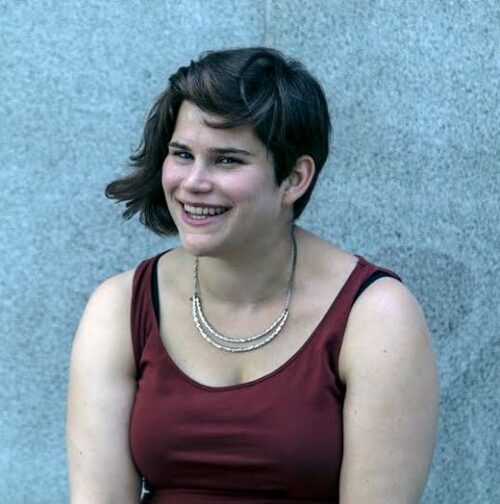 ELLAROSE CHARY (she/hers) is an award-winning New York based writer and advocate for inclusion in musical theater. She is a Dramatists Guild Fellow, NYFA Fellowship Playwriting/Screenwriting Finalist, Kleban Prize Finalist, Kernodle New Play Award Finalist, and winner of a BOH Cameronian Arts Award and the Weston Award for Musical Theater.

Her musical TL;DR: THELMA LOUISE; DYKE REMIX has been developed at The Eugene O’Neill Theater Center (NMTC Incubator Residency, NMTC Finalist), Rhinebeck Writers Retreat (Triple R Residency), and the UArts Polyphone Festival. She is the bookwriter for the award-winning THE DOLL MAKER’S GIFT, which opened at The Rose Theater in 2019 (“Families should flock to this one.” – Omaha World-Herald) and THE SÉANCE MACHINE, which premiered off-off Broadway at Obie Award Winning The Tank in 2019. Her other projects include: COTTON CANDY AND COCAINE, THE LAKE AND THE MILL, QUEER. PEOPLE. TIME., PATRIETTES (The #FWord Finalist) and the Malaysian musical MARRYING ME.

She has been in residence at Ars Nova (Uncharted), Harvard ArtLab, Catwalk Institute, and has received an Anna Sosenko Grant and a NAMT grant. Her work has been produced, developed and commissioned by the Great Plains Theater Conference, the Drama League, The Civilians and City Center (Encores! Off-Center), Theater C, Prospect Theater, The Flea Theater, Joe’s Pub, and 54 Below. She is a guest lecturer and production studio lead artist at Harvard University in the Theater, Dance and Media department.

She is an activist and advocate for inclusion in musical theater both on and off stage. She has written for The Lilly Awards Blog, HowlRound, and Musical Theater Today (where she is a contributing editor). She has appeared on panels at NYMF and with Honest Accomplice Theater and co-curates Tankaret, a cabaret series for underrepresented voices.