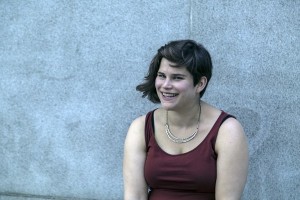 What was your first experience with Theater?

My entry point into theater was cast recordings, when I was a kid that was all I listened to (let’s be honest, they’re still basically all I listen to…I listen to cast recordings at the gym). I had a cassette tape when I was very young of songs for kids from Broadway shows?—?“Consider Yourself,” “Getting to Know You,” “I’d Do Anything”?—?that I listened to every night before I went to bed. I memorized the songs. My parents noticed this and they also were musical fans, and so they took me to a variety of local and regional productions. My first really clear memory of seeing a piece of theater is seeing the SECRET GARDEN tour in Chicago (I’m from Gary, Indiana…). My mom and I had watched the number from the show on the Tonys and we had been listening to the tape, and I think that was the first major touring show I got to go to. I remember sitting in the front of the balcony, peering over the edge and watching Mary sing and thinking that could be me, I need to be a part of that.

When did you recognize you were a writer? Or when did you start writing?

I used to write stories when I was in elementary school and everyone would tell me I was a writer, and I would say, “yeah, yeah, I want to be a painter.” And then, in middle school I got picked to write a column for the local newspaper and I HATED it, and everyone said, “oh you’re such a good writer, you should be a writer,” and I said, “No way. I’m never going to be a writer, that’s the last thing I ever want to be after this.” But, there was a musical theater writing class in my high school that was a big deal, where you got to take a trip to New York (from Indiana), so I did that and I loved it, but I still wasn’t going to be a writer, I wanted to be an actor. When I got to college, Brown had this program where students could write musicals for the main stage and I did that with my friends and it started to creep into my mind that MAYBE if I could write musicals, that wouldn’t be so bad. But I was still in denial about being a writer. My playwriting teachers were amazing, and very encouraging, but I don’t think I really accepted that I was a writer and that that was going to be the thing that I was going to do until after I graduated from the Musical Theatre Writing grad program at NYU. I still don’t really love the label, I never want to be one thing, I want to do all kinds of things, so now I say I’m a writer AND…