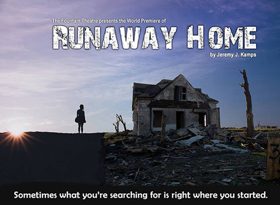 Sometimes what you’re searching for is right where you started. The Fountain Theatre presents a powerful, funny and deeply moving mother-daughter story by Jeremy J. Kamps. Multiple award-winning Shirley Jo Finney returns to the Fountain to direct the world premiere of Runaway Home for a Sept. 16 opening.

Three years after Hurricane Katrina, the unhealed wounds of New Orleans’ Lower 9th Ward continue to fester. Camille Spirlin(ABC’s American Koko, Fox TV’sRosewood, Nickelodeon’s Marvin Marvin) stars as 14-year-old runaway Kali. Rhyming, stealing and scamming her way through the still-destroyed neighborhood, she embarks on a journey to pick through the wreckage of what used to be her life. While the rest of the country’s attention drifts, the neighborhood’s residents are left to repair the damage from the inside out. As their attempts at renewal leave a path of destruction in their wake, Kali bears witness to what the floodwaters left behind…

“This play couldn’t be more timely,” says Fountain co-artistic director Stephen Sachs. “Hurricane Katrina may have ceased in 2005, but the storm of racism, poverty and class inequality rages on in our country to this day. We need look no further than Flint, Michigan, to see systemic government prejudice against citizens of color and the poor. But as Jeremy’s play so beautifully demonstrates, the bonds of family and community will weather any storm.”

When Kamps traveled to New Orleans two years after Katrina to volunteer “gutting and mucking” (stripping homes to the studs to remove mold), he had been teaching middle school in Connecticut. He already had an idea in his head about a runaway girl who collects other people’s garbage, finding meaning in the meaningless.

“Kali’s world paralleled the displacement, hope for renewal, fracture and resilience I was seeing in the social-political reality of the Lower 9th Ward,” he explains. “Whenever a character’s inner life and experience are so congruent with an important social issue, that’s the story I want to write.”

While in New Orleans, Kamps met Antoine, a man in his ’70s who had just returned to what had been his family’s home for generations. Antoine was going from house to house trying to trace relatives, friends, acquaintances and neighbors, to find out what had happened to them in the years since the storm. “His friendship helped me honor the stories of this community in a truthful way – to see the past, present and future of the Lower 9th through their eyes,” says the playwright.