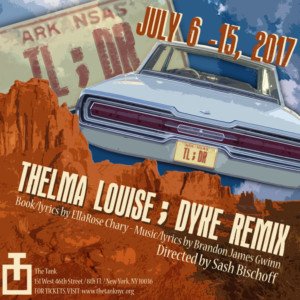 “TL;DR: Thelma Louise; Dyke Remix” is a parody sequel, queer rock musical that asks the question “why do strong female characters always gotta die?” and turns the death as freedom narrative for women on its head. It starts mid-air in a Thunderbird convertible suspended over the Grand Canyon.

Starring Alison Lea Bender (Academia Nuts NYMF) and COURTNEY DANIELS (Shrek; National Tour) as T and L, TL;DR is backed by a band of badass rockstars. Loud and proud, TL;DR resists the idea that queer/lesbian narratives have to live in subtext and defies the “bury your gays” trope by giving our heroines the ending they deserve. TL;DR takes on the patriarchy, the gaytriarchy, and anything else standing in the way of T and L’s love.

TL;DR has a book and lyrics by EllaRose Chary and music and lyrics by Brandon James Gwinn (Dramatist Guild Fellows, Ars Nova Uncharted Residents, Feinstein’s/54 Below). The production is directed by Sash Bischoff (BWAY The Visit, On The Town, How to Succeed) and musically directed by ELLEN WINTER. The production features Scenic Design by Ann Beyersdorfer, Costume Design by JUSTIN NAKO, and is managed by CHRISTINE J. COLONNA. The band features SAM KASETA (Bass), WES RUIZ (Drums), and JULIET GARRETT (Guitar). NATE BERTONE produces the production.

This show is being produced as part of The Tank’s annual PrideFest 2017! Over the course of two weeks, The Tank is opening the floor to a wide variety of performances and discussions surrounding the topics of sexuality, gender, and equality. The works presented will celebrate this community, address challenges that are still faced as we strive for equal civil rights, and evoke or give way to new ideas and perceptions on how we define ourselves, individually, within our own community, and in the global community at large. Whether through unity or discordance, these performances and discussions, workshops and forums, ought to shed light on the dynamic individuals and groups who make up the vibrant LGBTQIAP community.