Patricia Cotter’s play 1980 (OR WHY I’M VOTING FOR JOHN ANDERSON) has been nominated for a 2018 Non-Equity Jeff Award in the New Play category.

Catalan playwright Jordi Galceran’s play The Grönholm Method will receive its UK premiere at the Menier Chocolate Factory in May this year.

The play is set in the office of a Fortune 500 company in New York, where four candidates embark on a gruelling job interview. The play premiered in Barcelona in 2003, and explores the psychological means people will use to get what they want.

Jordi Galceran is an award-winning playwright whose works have been produced in over 60 countries around the world. He also works as a screenwriter and translator for other stage plays.

The Grönholm Method will have set and costume design by Tim Hatley, lighting by Hoard Harrison and sound design by Gregory Clarke.

The Grönholm Method will be at the Menier Chocolate Factory from 10th May to 7th July, with an official opening night on 22nd May.

This article was originally published by LondonTheatre.co.uk.

Each time slam poetry performer Kit Yan used the phrase, “Something is broken” on Monday night, the mantra boomed from the speaker like a cry of pain while he explored the different types of heartbreak he has encountered.

Cal State Fullerton’s Association for Inter-Cultural Awareness invited Yan to CSUF as the kick off performance for its three-day event, Culture Week.

Yan performed at the Underground Pub in the Titan Student Union where he read a few of the poems he had written for his book, “Queer Heartache” and spoke about his experience as a queer, transgender, Asian-American growing up in Hawaii.

“I strung (the poems) together to create this show to go on a journey, like a character does, of discovering identity and to grapple with the issues of being queer,” Yan said.

Beginning with his childhood in Hawaii, Yan spoke of financial struggles his family endured. He opened with a memory of his mother: though she was willing to make the sacrifice to get him braces, Yan declined the offer because he knew his family could not afford to fix his crooked teeth.

Because his family did not believe in wasting anything, everything was given a new purpose, like an old peanut butter jar acting as a thermos or Tupperware container. Yan said he still reuses empty containers as a way to remember the love his parents gave him.

While other families sought financial aid from the government, Yan said agencies that were supposed to help his family did little to support them.

After a brief summary of his childhood, he reflected on his self-discovery as a queer-transgender male. Excited to express himself when he first moved to Boston, he covered his Jeep in stickers to display all of his interests.

When talking about his first sexual experiences with men, Yan said that after experiencing heartbreak, he tried to give up on being queer. However, he realized being straight would not heal the pain caused by the heartbreak he was feeling.

He said his story is not only about his personal heartache and growth, but a way to inspire others to explore their own identity.

“I hope that people come away from watching the show feeling like they also have stories to tell,” Yan said. “There’s a colorful story within all of us.”

View the article on Daily Titan, The Student Voice of CSUF.

Mosaic Theater Company of DC announces an eclectic lineup for the 2018-2019 season, offering serious comic release alongside searing indictment; sustaining its commitment to local writers alongside its long-running Voices from a Changing Middle East Festival, while championing intercultural encounters and honoring iconic figures in African-American culture. In addition, Season Four is the first season to achieve gender parity for Mosaic’s playwrights: four of the plays are written by men, and four by women.

“The process of choosing Mosaic’s fourth season was the most inclusive and comprehensive in our brief but intense history,” says Founding Artistic Director Ari Roth. “That befits a company dedicated more, now more than ever, to forging a Fusion Community in its audience and living out the values of Inclusion, Diversity, Equity and Access, on stage and off. Thematically, we’re spending a little more time in the past-not to turn away from the polarizing present, but to draw sustenance, example, and inspiration from history to meet our challenging moment. We are effectively saying: ‘This is how it’s been done; this is how we fight; this is how we overcome.'”

The 2018-2019 season kicks off with Marie and Rosetta, a musical celebration of two extraordinary Black Women full of flights of joy and gospel jubilation. Written by George Brant, the author of the internationally acclaimed Grounded, this powerful play with music chronicles the unlikely first rehearsal between Rosetta Tharpe and the prim, young, Marie Knight.

The Festival is followed by a bold new adaptation of Richard Wright’s iconic novel about racism, freedom, and justice, Native Son, directed by Helen Hayes Award Winner Psalmayene 24. Native Son will be performed in repertory with The Peacemaker: A Play About Guns in America, written and performed by Aaron Davidman, the creator of Wrestling Jerusalem.

The eight-play season will be rounded out by a workshop series tied to main stage programming, including a commission for director Psalmayene 24: a two-performance workshop entitled My Notes on Baldwin’s Notes of a Native Son, a response piece to coincide with Psalmayene 24’s production of Native Son. The workshop series will also include Twice Bereaved by Joshua Sobol and Eyes: A Theatrical Performance Based on Poems of Mahmoud Darwish as part of the Voices from a Changing Middle East Festival.

The anthology “When the Promise Was Broken: Short Plays Inspired by the Songs of Bruce Springsteen” will be out in May from Smith & Kraus Theater Book Publishers. 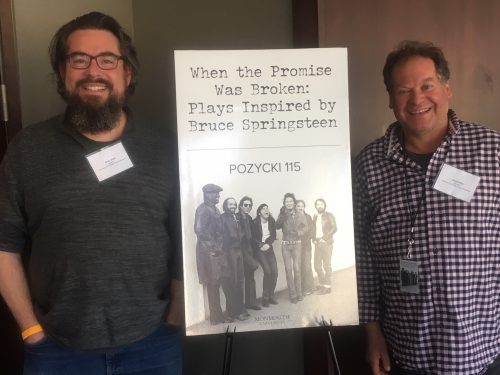