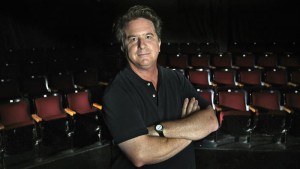 From the L.A. Times, by Charles McNulty

“I was working at the time at the Canon Theatre in Beverly Hills,” Sachs recalled. “I was there for almost two years, and we were doing ‘Love Letters,’ which was running forever, when I got this call out of the blue from Deborah Lawlor, who said that she wanted to start a company.

“Deborah and I had worked together on a project when she was an independent theater producer in L.A.,” Sachs continued. “But she was in New York and had got in a very serious car accident. When she was lying in the hospital, she said to herself, ‘If I survive this, I’m going to do what I always wanted to do, which is to have a theater of my own.’ Thank God she survived. And she called me — I remember that phone call so well — and said, ‘I want to start a theater. Will you run it with me?’ I said, ‘Absolutely.’ ”

The Fountain occupies an easy-to-miss building on a nondescript stretch of Fountain Avenue, the street made famous by the practical advice Bette Davis reputedly offered young actors with their sights set on Hollywood: “Always take Fountain.”

Inside, with its folksy upstairs café and single unit men’s room with delicate plumbing, it looks more like a private home in need of a gut renovation than a prominent theater and dance hub. (The Fountain, in addition to being one of the top five small theaters in L.A., is also the foremost presenter of Flamenco in the area.)

The moment Sachs and Lawlor walked into the building, they knew they found their theater. “There’s the wonderful relationship of the stage with the audience that’s intimate and embracing. We just felt that this was home,” Sachs said. “We bought the building in 1990. We own the building outright. Smartest thing we’ve ever done.”

Stephen Sachs will be honored on October 3rd at a special event commemorating the theatre’s 25th anniversary.

The Latina/o Theatre Commons (LTC), in collaboration with Emerson College’s HowlRound, a commons by and for people who make performance, announces the 2015 Carnaval of New Latina/o Work (Carnaval 2015)  showcasing twelve new works by Latina/o playwrights from across the U.S., July 23-25, 2015 in Chicago.

Anne Garcia-Romero‘s MARY PEABODY IN CUBA was a semi-finalist!  Ms. Garcia-Romero is also on the Steering Committee for the Carnaval.

Join Ms. Garcia-Romero and the rest of the finalists and committee members in July for this fantastic celebration! The New Jersey State Council on the Arts has announced their 2015 Artist Fellowship Award recipients.  The Council focused on the categories of crafts, photography, and play writing this year.  Yasmine Rana (pictured left), as the top winning playwright, has been awarded a grant of $11,500.

For the full story, follow the link HERE.  The story begins in the second paragraph.