In 2013 the playwright Yasmine Rana was invited to submit a short play for a ten-minute festival in New York. She responded with a piece that was, in part, a dramatic response to the art installation by Imran Qureshi at the Metropolitan Museum of Art, The Roof Garden Commission. We were seized with admiration for “Fauna and Blood” and accepted it for publication in KROnline. Ms. Rana then offered a companion piece, also of great power. We are delighted to present both short plays here, along with photos of Imran Qureshi’s The Roof Garden Commission, which inspired them.

Astroblast! is based on the Scholastic book series by Bob Kolar and follows the hilarious adventures of a crew of irresistible animals in outer space. Through the crew’s friendship, the series imparts important messages (Rocket Rules) to preschoolers about embracing differences, modeling positive relationships and fostering healthy habits

“Odd couple’s row has comedy off to fine art”

Back in the West End for the first time in eight years, Kathleen Turner reminds us what a genuinely compelling stage star she is in this nimble, rewarding, new art-world comedy about faith, fakes and first impressions.

Yes, at first glance, Stephen Sachs’s one-act play appears amusing but a bit pat. It pits Ian McDiarmid’s prissy English art expert, Lionel, against Turner’s working-class bartender, Maude. Lionel has flown by private jet from New York to a trailer park in Bakersfield, California, to test Maude’s claim that the canvas she bought for three dollars from a local junk shop is an original Jackson Pollock (the show is inspired by a true story).

As he sneers at Maude’s cluttered trailer home — a marvellously intimate, convincing set by Tom Piper — and assures her that he is a connoisseur and she is a nobody, you wonder how much mileage Sachs will get from this odd couple of lonely, ageing abrasive types from opposite ends of the social scale.

Plenty, it turns out. “My first impression of you was completely inaccurate,” says Lionel after what turns into a thoroughly entertaining 85 minutes of quipping, arguing, boozing, opining, fist-fighting and soul-baring. Polly Teale’s well-paced production allows us to see that Lionel’s superciliousness is his barricade against the world, while Maude’s uneducated bluffness — “Well, who else would paint shit like that?” growls Turner, gesturing at the 5ft-high picture she has propped up for McDiarmid to inspect — conceals an intelligent, determined woman looking more for acceptance than money. Like Art before it, this play’s real canvas is not just artistic authenticity but human authenticity.

McDiarmid is a treat. Enthusing about Pollock’s “lariats of colour”, he renders the painter’s style in action, his body swirling around as if wielded by Pollock’s own hand. As Lionel gets blurred by booze, McDiarmid shows us a man whose determination to be a “fake-buster” is inseparable from the way he lost his pre-eminence in New York’s art scene.

Although Turner handles Sachs’s comic dialogue with zest, this American screen star makes a big character feel utterly true as she stalks around in jeans and plaid shirt, glass of bourbon in hand, uttering throaty put-downs and letting us in on her sadness without turning sentimental.

The title is a spin on a Pollock painting, Lavender Mist, that has a bearing on a plot that takes on a thrillerish knottiness as it goes along.

Yes, at this short length it’s impressionistic, finally offering more questions than answers about taste, expertise and artistry. No matter: this pithy, beautifully performed play put a smile on my face and kept my brain buzzing for a good while afterwards. 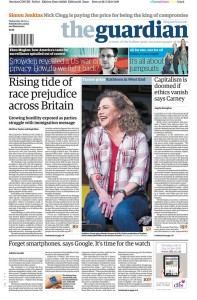 “Gravel, wheeze and cigarettes … what a voice Kathleen has”

“an intellectual show full of shadings. Ad you are out in plenty of time for dinner.”

Turner and McDiarmid are terrific ..

“This odd couple are a work of art”

Internationally recognized stage and screen star Kathleen Turner headlines the new West End production of BAKERSFIELD MIST and a sneak peek at the acclaimed actress in action onstage is now available to view.

Turner stars alongside notable British actor Ian McDiarmid in the West End premiere of the comedy by Stephen Sachs, which premiered in Los Angeles in 2011.

In a recent interview, Turner described her character in BAKERSFIELD MIST as such: “This blousy woman, a little rundown – the kind of cliche of an American woman you Brits just love – but there’s more to her. It’s about the transformative power of art and class and truth.”

Furthermore, the character is named Maude Gutman and is described as “an unemployed bartender who buys an abstract painting for $3 and discovers it could be a priceless Jackson Pollock piece.”

Check out the original BroadwayWorld article on the matter here.

BAKERSFIELD MIST is scheduled to play at the Duchess Theatre from May 10 to August 30, 2014.

More information on BAKERSFIELD MIST is available at the official site here.

The first recipient of the Donna Perret Rosen Award was composer-lyricist Adam Gwon in 2012.

Mills’ musicals have been performed at New York City venues, including 59E59 and West End Theatre. His musicals include Illyria, Golden Boy of the Blue Ridge, The Flood and The Taxi Cabaret. He has supplied lyrics for the Off-Broadway show Iron Curtain (book by Susan DiLallo, music by Stephen Weiner), which ran in November 2011. He co-wrote The Flood with Carla Reichel, which was selected for the 2001 ASCAP Musical Theatre Workshop. His show Marco Polo, written with composer Deborah Abramson, was selected for the ASCAP Musical Theatre Workshop in 2000, and both Mills and Abramson were chosen as 2000-01 Dramatist Guild Fellows.

In addition to the Donna Perret Rosen Award, Mills is the recipient of the 2011 Cole Porter Award, the 2010 Kleban Award for lyrics, the 2007 Fred Ebb Award for emerging songwriters, a 2006 Drama Desk nomination for his show The Pursuit of Persephone (Best Music and Best Orchestrations), the 2003 Richard Rodgers New Horizons Award from the ASCAP Foundation and a 2002 grant from the Jonathan Larson Performing Arts Foundation.

Mills is currently writing lyrics for the Broadway-aimed musical The Honeymooners.